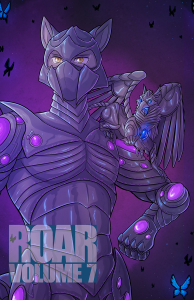 Welcome to a LEGENDARY volume of ROAR! That’s right, the theme for the seventh volume is legend, and it will take you on a journey from a fortune teller’s bamboo hut to the end of the world in the coils of a dead snake god, back in time to the Cretaceous and then up to the stars. You’ll meet tigers and cranes practicing Kung Fu, a singing frog, a gambling pigeon, a rap-star bearded dragon, a rhinoceros who’s friends with a goat, and several creatures you’ve probably never seen before.

ROAR 7 is available in print from FurPlanet and DRM-free ebook from Bad Dog Books, as well as from Amazon.