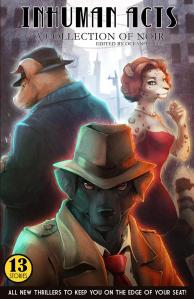 The project I’m most excited for is Inhuman Acts which is an anthology of anthropomorphic noir stories set to be published by FurPlanet and released at Rainfurrest 2015. Anthropomorphic literature has an interesting ability to spin any genre, and I wanted to see a variety of different noir stories seeing how they change when you add animals to the mix. Noir and mystery are some of my favourite genres so I’m happy to bring some of that love into this project. It’s been a big challenge to step up and be a lead editor, but it’s been a lot of fun too.

I used to be a heavy outliner but would find myself bogged down on trying to figure out the story and never sitting down to write it. Now I like to start with a central concept, a main conflict, or a twist and go from there. From the initial idea, I set up some characters, point them towards some plot points and a goal or a climax, then let them fill in the rest. I still like the loose structure of knowing where the story is going, but by allowing the characters to lead me there, the story becomes more organic and real. Sometimes they get to the end I set for them and they replace it with something better!

A story filled with twists and mysteries. I love creating interesting and smart characters, tossing them in dangerous situations or traps, and watching them find a way out. When a reader comes back and tells that an ending took them by surprise, it always puts a grin on my face.

There’s a story I’ve written that I’m trying to publish about two teens in small town Saskatchewan. It’s really a love letter to what it was like growing up in such a small rural community and the two main characters are a reflection of my experiences and thoughts. There’s something about such a small community and a simpler life that creates a world view most people don’t see and you appreciate the small things in life.

One book that changed my outlook on literature was Douglas Adams’s Hitchhiker’s Guide to the Galaxy. Most sci-fi I had read up to that point came from Arthur C. Clarke and others, and when I was looking for a book for a grade twelve book report, I stumbled upon Hitchhiker’s Guide. Here was a book that took everything I knew about stories and literature and turned it on its head. A ridiculous tale of world building and hilarity while still telling a fantastic story. It showed me that there’s no real rules to writing and you shouldn’t be afraid to try new things.

In preparation for editing Inhuman Acts, I brushed up on some classic noir titles. One of them was The Maltese Falcon. It was great to see the foundation of a lot of hardboiled crime and noir elements before they were even tropes. I’m still a sucker for reading the classics and you’ll often find there’s more than one crowding up my reading pile.

I enjoy playing games of all types: video games, board games, table top RPGS, card games (I’m even a level one Magic judge), and even just any kind of puzzle I can get my paws on. There’s usually a pair of headphones or ear buds near me at any time so I can listen to my music. I’ve also taken up poi spinning to dance along with my music. When the weather’s nice (AKA not winter), I like to take my motorcycle out to the mountains to go soak in the hot springs.

“Write now! Edit later!” is my writing mantra. It’s something I often have to chant it to myself over and over while writing up a first draft. Otherwise I’ll want to go back and edit what I’ve written and worry too much about if it’s right when the story isn’t even written yet. I’ve seen too many beginning writers get stuck in this editing loop, worried if their first chapter or first scene is good enough before they’ve even written more. Finish writing the story first! There’s always time for editing later and you’ll have the accomplishment of having written a full first draft.

Check out Inhuman Acts when it’s released and let me know if you liked it! While at the FurPlanet table, you can find my stories in some anthologies like Roar 6, The Furry Future, and the latest Rainfurrest charity anthologies. I also have a story in Rabbit Valley’s Pulp! and occasionally I post stories on my SoFurry account: ocean.sofurry.com. You can listen in on the bi-weekly writing podcast I co-host called Fangs and Fonts (fangsandfonts.com). It’s put on by myself and my local furry writing group. We talk about writing techniques and the writing culture in the fandom.

The fact that you can be whoever you want to be in this fandom. The furry fandom is very open and friendly, and it’s great to see so many people get along without caring about gender, race or sexual orientation. You wanna be a purple tiger fox or a orange elephant or a green wolf? Cool! I hope it continues to be a place where people can be themselves and happy with who they are.