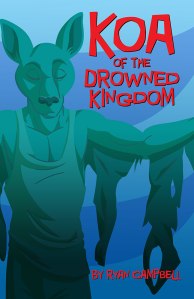 My most recent book is my novella, Koa of the Drowned Kingdom, published through FurPlanet. It’s about a young fruit bat with torn wings who lives with a family of otters and dreams of rejoining the flighted world of the bats he left behind. The original idea for the book, like most of my books, came from a song on the radio. I don’t remember what it was anymore–something about an upside-down world, I think. That set off the fireworks in my head and I started imagining who would live there (bats, obviously), and what that world would be like. That night I couldn’t go to sleep. The story kept twisting and building itself in my head. By the time I finally dropped off, I’d composed nearly the entire thing, including every major plot point and all the major characters. From there it was just an issue of writing it down. I really tried to focus on a tight, well-edited plot, in which every piece is necessary at least twice. Pull one thread and it should fall apart from both ends. I find writing those kinds of plots very satisfying.

It’s funny–I used to be a pantser, but I’ve found lately that that doesn’t work out well when I’m trying to get motivated to write. I have to know before I sit down what I’m going to be working on for the day, and it also helps if I have big major plot events that I’m looking forward to writing–that I’m writing toward. And now that I’m writing bigger, more complicated novels, I pretty much have to have an outline. That’s not to say that ideas aren’t occurring to me all the time during the process, or that I don’t change things or add things as I go! The outline gets modified a lot. The characters speak to me and require me to motivate them in different ways before they’ll agree to move through the obstacle course I’ve set up for them. But I have to know: if I change this plot element, how does that impact the story later? How will this compromise someone’s character arc? And the stories tend to be just a bit too big for me to do that well without an outline.

Fantasy all the way. I love working with magic because to me it’s the closest to writing from pure imagination. Anything you can think of you can get away with, as long as you set limitations around it, rules, and then work within those rules consistently. It’d be fun to write scifi, but I kind of feel like I’m not smart enough. To write scifi you have to know how the whole world works, and I’m more an inner mind kind of guy. I’d rather make stuff up than take it apart to see how it works.

To some degree I identify with all my characters. If we’re talking about The Fire Bearers, then I identify with Clay’s sense of wonder and also his self-doubt. I can be defensive and officious like Doto at times as well. And maybe most of all, I identify with Laughing Dog and his independence, his tendency toward selfishness, and his rejection of his people’s beliefs. 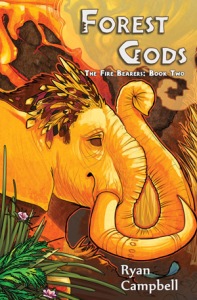 Okay, I love love LOVE Robin Hobb and snap up everything she’s written. I love the way she writes characters who push back against their destinies and against the identities the world tries to foist on them. I resonate strongly with the way her characters hurt themselves because they feel like they have to. I’m a huge fan of Terry Pratchett as well. I love the way he blended wisdom and humor, the way he found love and compassion for people in their foibles, in their weaknesses. I think he’s one of the greatest humanist writers I’ve ever read. Going farther back, Ray Bradbury and Tolkien were my biggest influences in my youth. They took me to faraway places when, frankly, I kind of needed to leave the place I grew up.

Probably Kindred, by Octavia Butler. Think of Outlander meets 12 Years a Slave. It’s a great look into how easily people can be seduced into accepting injustice, and how larger cultural narratives are responsible for shaping villains and victims, and how inescapable that can be. But if you’re asking me for recommendations, boy do I have some. Check out:

I love video games, and I’m heavy into indie adventures. I’m also a weightlifter, I play the piano when I need to relax, watch movies and tv with my husband, and I’m getting back into backpacking and camping again. It’s my dream to camp in Patagonia someday.

Read what you love and write what you love. And just keep doing it. Most people fail because they’ve bought into this myth that you either have talent or you don’t, and if you don’t get “discovered” after the first few novels or short stories you write, then you don’t have “it.” But it takes a long, long time to get good at writing, and it takes humility to work to get better. Beyond that, writing is so deeply personal. The Internet is full of writing advice that is going to work for some people and not for others. There are a thousand different ways to be an awesome writer. You just have to find yours.

Kind of all over. Most of my books should (at some point) be available on amazon.com, but my publishers would like people to grab stuff off of furplanet.com and sofawolf.com. You could also visit their tables at your local convention.

I love that we are probably the most creative fandom out there. We don’t have a show or a book series that we are all fans of like My Little Pony or Star Trek or anime fans. We’re fans of the stuff we create. And we make awesome stuff. The fandom has great writers and great artists and great suitmakers and great musicians — there’s so much art, legitimate art, in the stuff we do. And one of the things that does for us is that it makes us super supportive and welcoming toward each other. Of course you have your bad eggs, but every fandom has those. I think furries get down on themselves so hard, and I wish they wouldn’t. We’re an amazing bunch, and we need to focus on those things that make us a strong community. We see our own problems up close because we’re right next to them, but we should see our strengths, too: our creativity and supportiveness. That’s something to be proud of.