My current project is a three part fantasy series called Chaos Awakens.  Book one, Servant of Steel, and book two, Crown of Steel, have already been published and I’m hacking away at the third book currently (SOMETHING of Steel).  My goal is to have it published by the end of the year.

This series was inspired by my love of dark anti-heroes and epic conflicts.  I really wanted to create a world that was gripped in the late stages of its own demise, and to tell the story of the people who became heroes not out of choice, but out of necessity.

I’m the sort of writer who likes to dive right into a project.  I’ve tried outlining in the past, but I find that the process of outlining causes me to fall into formulaic story arcs.  It’s far too easy to become systematic when you’re basically making a list of key elements of your plot.  Instead, I build the story up in my mind, take notes on key points I want to include, and then start writing from the beginning. While I’m working I’ll reference my notes here and there, change them, rework plot details, and often scrap large portions of my original plans.  Everything in service to the story.

When you’re reading one of my books you should never be bored.  If I re-read something and it’s dull, I throw it out.  It’s actually a chaotic process.  I wouldn’t recommend it at all.

I’m a huge fan of fantasy, but I really like to throw in elements of horror.  I like to be scared, and I like to scare other people.  It’s intoxicating.

This is a difficult question.  I’m always tempted to pick the current lead from my long-term project because, at any given moment, that is the one character I need to identify with the most.  For my current series I’ve spent a lot of time in the head of my lead character, Xandrith.  We share a degree of dark humor and bitterness, but he also differs from me in a lot of ways.  The lead from my previous trilogy, The Hungering Saga, was probably closer to my actual personality.  He could be a real bastard at times.   He tended to let his emotions lead his actions, and I have to admit I do that more than I should.  I guess I identify with him, Lowin, the most.

Stephen King, Clive Barker, David Gemmell and Gene Wolfe.  King and Barker were huge horror influences.  I started reading their books when I was about twelve, and I read mostly horror until I was about sixteen and someone handed me a Dragonlance Kingdom book.  I had never read fantasy before that.  In fact, I had considered the entire genre to be nothing but fluff.  Heh, well, I read dozens of the Dragonlance books, and then I couldn’t get enough of the genre.  Gemmell showed me that heroes could be dark and gritty, and Wolfe showed me that fantasy and sci-fi could be elevated to a form of artistry beyond what was generally expected from the genre.  I think my writing is closer to Gemmell’s than it is to Wolfe’s, but Wolfe gives me a level of prose to shoot for.

I have had so little time to read lately, but I would say that the last books I read that really, really captured my attention were the Mistborn series by Brandon Sanderson.  That man is brilliant and prolific, two traits that rarely go well together.

I’m a gamer and a movie lover.  Lately my time away from Word has been spent playing Guild Wars 2.  Excessively.  I might have a problem. 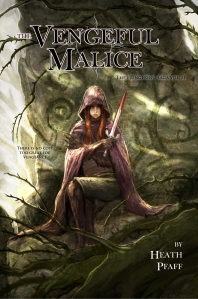 My work can be found on Amazon.com.  Just do a search for “Heath Pfaff” and my work will pop up.  You can also check out my Facebook fan group.

I frequently give away e-books, audiobooks, and sometimes even hard copies of books when I have them.  Come join the fan page!

Furry folks tend to be incredibly accepting and inviting.  I have met some of my very best friends in this fandom, and some great partners in crime.  All of my books have had covers drawn by furry artists because they are awesome, talented folks.   My favorite thing is that first thing, though.  No group is more accepting.  None. Not-a-one.