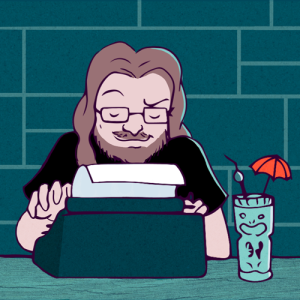 When not designing spacecraft AIs, racing to stop terrorists, or romancing werewolves, Watts Martin writes stories for fun and documentation for a living. (Which is, for the record, often still fun.) Most of Watts’s stories involve anthropomorphic animals, and between them they‘ve received four Cóyotl Award nominations and three wins—one each for novel (Kismet), novella (Indigo Rain), and short story (“Saguaros,” in ROAR 9). You can find other works by Watts in anthologies including The Rabbit Dies First, Inhuman Acts, Five Fortunes, and The Furry Future, and magazines including New Fables and Heat.

Watts was the co-editor of the short-lived but influential furry magazine Mythagoras in the early 1990s, and wrote the once famous novella A Gift of Fire, A Gift of Blood. Watts has also served as the president of the Furry Writers’ Guild.