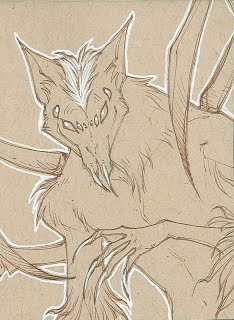 Tarl “Voice” Hoch is a writer from Alberta, Canada. Sired by two sci-fi and fantasy fans he was almost named Kenobi but was later named after the main character from the Gor series of novels. Constructing his tales in the chaotic Albertain weather, he finds his primary influence among such authors as H.P. Lovecraft, Dan Abnett, Selena Kitt, and Esmerelda Green. He fully blames Disney’s Robin Hood and The Lion King for his love of the Furry Fandom.

Primarily writing horror and erotica, Tarl has been known to extend his claw to other genres as well. A lover of horror, erotica, weird westerns, paranormal, fantasy and sci-fi, you can usually find him staring off into space as he loses himself in one story or another.

His current story can be found in Will of the Alpha edited by Rechan. This is his first story to see publication within a paying format, but definitely not his last.