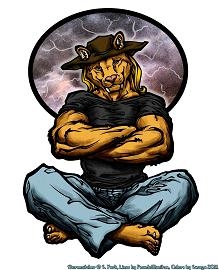 Stormcatcher hails from the American Midwest but is originally from the deep South—and while his tusks make for great temporary impalement storage devices for Moon Pies, they make his Southern drawl sound even goofier. His enjoyment of writing fiction didn’t start in earnest till he won third place in a college essay contest (a copy of the “Psychotronic Book of Film”.  Best.  Prize.  EVER).

He’s had some short stories published in Bad Dog Books’ FANG and ROAR anthologies, ranging from erotic, horror, and one clean story that one kind soul nominated for an Ursa Major Award several years ago (he owes that person a huge hug and a burger of their choice, by the way). He’s done some technical writing in his I.T. position, and is currently working his way through multiple writing correspondence courses covering topics like copywriting, writing children’s books, and horror stories.  He’s pretty sure he doesn’t have ADHD, but you might be able to convince him after he’s had a couple beers.

When he’s not reading or writing, he enjoys perusing the web for Halloween-related items, watching good and bad horror movies, taking hiking trips, and visiting theme parks to sate his roller coaster obsession. His partner doesn’t understand the whole anthro thing, but he puts up with it because he doesn’t have the heart to tell his other half that he should technically be extinct.