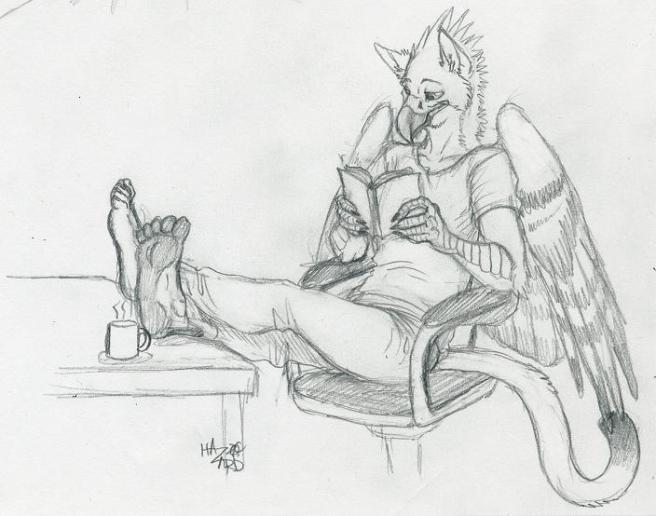 Mech is a gryphon writer that has been in the fandom for a long while. Got back into it, and thus writing, back during high school. Scrounging up an old laptop, this cunning gryphon managed to convince his teachers that he needed it for taking notes and doing school work, but would spend most of his time working on a story. This first great work wound up being roughly 80,000 words of story that revolved around a grand, convoluted plot. All known copies of this work have been destroyed and all but forgotten. Any witnesses to these early works have also been disposed of.

After a few years of intense training at the hands of a top-notch Role Playing forum, the gryphon returned to try his hand at writing again and found a groove that he liked. Together with his dragon, a great source of inspiration for him, Mech continued to write story after story. Each one leaving their mark on his style and further evolving it. The gryphon’s stories tend to swing from either rather normal, to comedic, and even some rather dark pieces that have earned him no small amount of flak. Still, the writer presses on for his craft.

Imagine his surprise when, out of the blue, he was invited to take place in the Mythical Skies anthology. That was his first taste of being published, and the gryphon has found himself hungry for more. He recently submitted a story for the Punked anthology, a cyberpunk bounty hunter piece, and is currently waiting on edits. He’s got his eyes trained on a few more anthologies, if only he can find the time to get to writing.

Will the gryphon be able to overcome his greatest foe, his lack of atten… ooh, shiny!