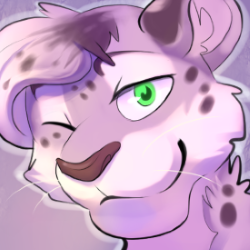 Mars was born in Illinois, the land of the two big Cs: Corn and Corruption. He grew up going to private school, often called out by teachers for daydreaming and being absentminded. He thinks of this as the first time he created a story, even if at the time he only told them to himself in his head. He has known of the fandom since approximately 2007, and had also been writing poorly thought out fanfiction for about a year or two prior to that. He dabbled briefly in furry, exploring several webcomics and works for a brief two-week span before ultimately stopping and pursuing other interests. It wasn’t until late 2013 that his interest picked up again, when he first seriously began to write something original that he could feel pride in.

Mars’s interests vary in terms of what he enjoys both reading and writing. Post apocalyptic, SciFi, and slice of life fiction are some of his preferred genres, but he also finds enjoyment in the occasional horror story or romance. When not reading or writing, this snow leopard can be found consuming other forms of media and drawing inspiration from anything and everything around him.

His story can be found in the Furry Writers’ Guild’s anthology, Tales From the Guild, Volume 1: Music to Your Ears, his first published work, but certainly not his last.