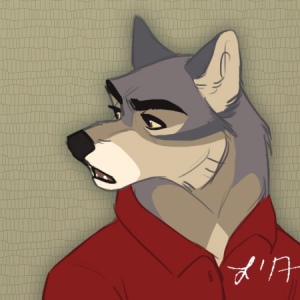 Crimson decided in the middle of 2015 that he should stop thinking about writing stories based on Stan Rogers songs and start writing stories based on Stan Rogers songs.  Most of his stories involve canids because he’s partial to them, and the bulk of his work is written for fun. The bulk of same stories are also adult, for similar reasons. Some people pay him to write software, but as soon as he figures out how to make the same kind of money writing about wolves in adult situations, he’ll probably do that, instead.
You can find him online blathering about writing on Twitter (@crimsonsign, it’s a very clever joke about tracking, he swears) and at a handful of conventions, usually explaining how he has work to do (he started staffing conventions before realizing that writing can be fun, too). His stories can be found online on SoFurry, in a few conbooks, and in the fourteenth volume of that fine furry erotica anthology from Sofawolf, Heat.