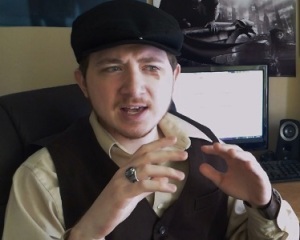 Isiah Jacobs considers himself a reviewer, producing videos on Youtube under the channel name “FurReview”. Isiah’s YouTube channel is on ongoing project wherein he is constantly revising and polishing his approach to his reviews, and the subject matter therein. One day he hopes to settle on a final style he is satisfied with, and thus making a proper name of himself.

Isiah was aware of the fandom as early as 2006, however his experiences were mostly limited to deviantART, what was then called YiffSTAR, and other various image sharing websites. It wasn’t until 2008 that he officially joined the fandom by registering under the name “Don46” on FurAffinity. By that time, Isiah committed most of his time browsing and scouring every furry-related corner of the internet.

The idea to start FurReview didn’t occur to Isiah until 2011. The inspiration came to him partly out of his fascination with Stephen Colbert and “The Colbert Report”. The other half came as a final decision upon looking at the works of Doug Walker and all associate reviewers on thatguywiththeglasses.com, and looking upon the furry fandom and not seeing something similar. From there, Isiah set to after a vision to start a web series that focused on interviewing content creators and reviewing the many different mediums of art that come from the community.